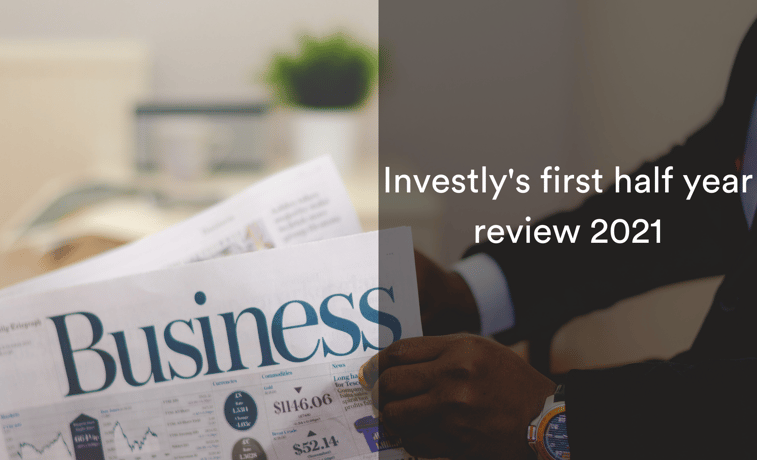 The first half of the year is over and it is time for a brief mid-term review. Last year, the Estonian nationwide factoring market decreased by 25.9% compared to 2019 - there was not a single month where results would have exceeded the previous year. This year, the national factoring turnover has started to grow again: since February, the volumes have been 11% higher than those in 2020, on average. Thus, the factoring market shows signs of economic recovery and growth.

Factoring turnover on Investly platform in 2020 was higher than in 2019, but there was still no growth of 25-30% as seen previous years. The first half of this year, on the other hand, shows considerable increase in volumes. Compared to the first half of 2020, the factoring volume on Investly platform was 11.6% higher in 2021 and compared to the same period in 2019, it was 26.2% higher.

We did expect a slightly higher growth in the first six months. However, in January, the national factoring turnover in Estonia was still almost 27% lower and the volume on Investly platform 22.5% lower compared to the previous January. Since February, the monthly factoring turnover on Investly platform has been 18.3% higher on average - particularly strong growth has taken place in the last two months, when volumes were 34.1% and 20.3% higher than a year earlier.

Since 2017, the financing volumes on Investly platform have been, on average, 23.4% higher in the second half of the year than in the first half. However, we forecast a larger financing volume for the second half of this year. Why? Firstly, the current average is overshadowed by the modest second half of 2020. Secondly, at a time of economic growth, companies need a lot of working capital - especially when the severe downturn is just behind us. According to Bank of Estonia, Estonia's economic growth should remain at 5–8% this year and stabilize at 4–5% next year.

By today, all invoices financed through the Investly platform in 2020 have reached their due dates. Due to the effects of the corona crisis, we took a very cautious approach right at the beginning of 2020, and we are pleased to note that out of the 4591 invoices financed through the platform, there are only two invoices (connected to the same Buyer) that have not been repaid. The unpaid main part of these two invoices makes up 0.26% of all investments made into Estonian invoices via the platform last year. The average volume of investments on platform in 2020 was around 3 million euros. Today, in the summer peak season of 2021, the volumes are higher than ever before: there are various attractive investment opportunities on auctions and millions of euros worth of invoices are yet to be financed.

Thank you for being with us and we wish you the best investment experiences!